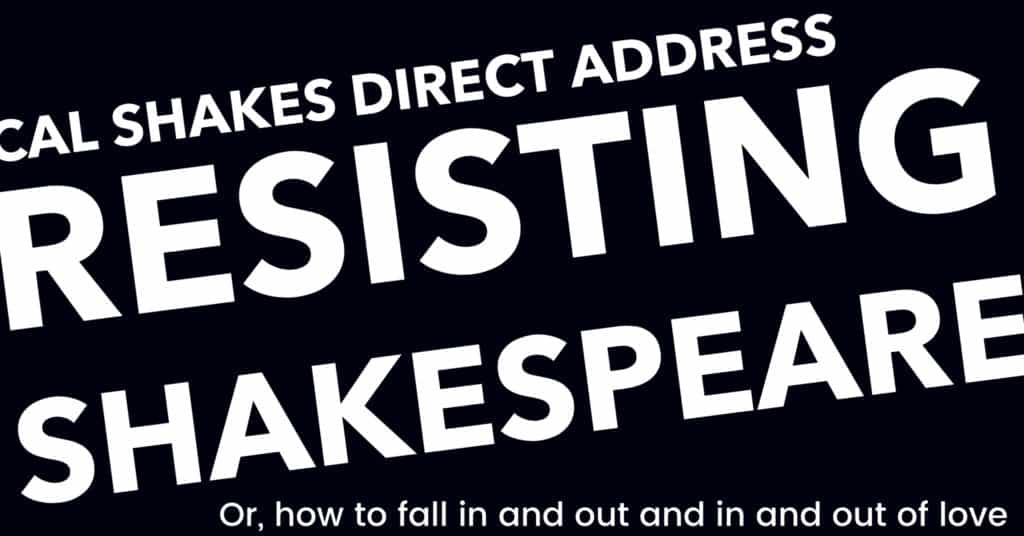 This summer through our Allyship+Anti-Racism series, Cal Shakes has been examining the systems and structures, from Anti-Blackness to white supremacy, that have led us as a nation to this moment of reckoning. Next Friday we turn the lens inward, as we introduce a new series in our Direct Address program: Resisting Shakespeare, where we’ll be joined by good company—friends and colleagues—in frank dialogues about misguided loves and misplaced allegiances, and a hope for reconciliation and redemption amidst uncertain times. Oh, and a little Shakespeare, too.

We are aware that for many Jewish members of our community, this event will occur during preparations for Rosh Hashanah. This event will be recorded with the intention to share publicly following the conversation (pending panelist consent).

Marcus Gardley is a proud Oakland-born playwright-poet whom the New Yorker calls “the heir to Garcia Lorca, Pirandello and Tennessee Williams.” His play, THE HOUSE THAT WILL STAND won the 2019 Obie award. It is now being adapted into a motion picture. Another play, X OR THE NATION V. BETTY SHABAZZ was a New York Times Critic Pick and was remounted off-Broadway in the Spring of 2018. He is the recipient of the 2019 Doris Duke Artist Award and the 2019 San Francisco Library Laureate Award. Gardley received the 2018 Guiding Light Award presented by Cal Shakes and won the 2017 Special Citation Theater Award for his play black odyssey. He is the 2015 Glickman Award for THE HOUSE THAT WILL NOT STAND and the 2013 USA James Baldwin Fellow. He was the 2011 PEN Laura Pels award winner for Mid- Career Playwright. His work has been produced across the country with several productions in England and France. Currently, Gardley is writing a biopic about Marvin Gaye produced by Dr. Dre and a film adaptation of THE COLOR PURPLE musical.

Nataki Garrett is Oregon Shakespeare Festival’s sixth artistic director. As the former associate artistic director of CalArts Center for New Performance, Garrett has been hailed as a champion of new work as well as an experienced, savvy arts administrator. 2019 was Garrett’s first season at OSF, where she directed How to Catch Creation. At CalArts, Garrett oversaw all operations of conservatory training and produced mainstage, black box, developmental projects, plays, co-productions and touring productions. She is currently on the nominating committee for The Kilroys, and she recently served on the Harold and Mimi Steinberg Charitable Trust Distinguished Playwright Award nominating committee and the Fox Foundation Resident Actor Fellowship panel.

Garrett’s forté and passion are fostering and developing new work. She is responsible for producing the world premieres of The Book of Will by Lauren Gunderson, Two Degrees by Tira Palmquist, Zoey’s Perfect Wedding by Matthew Lopez, The Great Leap by Lauren Yee, and American Mariachi by José Cruz González. She also directed the world premieres of BLKS by Aziza Barnes and Pussy Valley by Katori Hall, and the U.S. premiere of Jefferson’s Garden by Timberlake Wertenbaker. She is well known for her work with MacArthur Fellow–winning playwright Branden Jacobs-Jenkins, having directed the regional premieres of several of his plays, including Everybody at California Shakespeare Theater and An Octoroon at Woolly Mammoth Theatre Company. Garrett also directed the first professional production of Jacobs-Jenkins’s acclaimed play Neighbors at the Matrix Theatre Company in Los Angeles. Garrett’s production received five Ovation Award nominations—including Best Production.

Garrett most recently served as acting artistic director for Denver Center for the Performing Arts (DCPA) during the $66 million organization’s 18-month leadership transition, working in partnership with the chief executive officer, managing director, and board of directors to oversee all artistic operations for the theater company. During her tenure, she produced a very provocative Macbeth; the play was the most successful production in the Space Theatre’s 40-year history. She also initiated and negotiated the first co-world premieres in 10 years for two DCPA-commissioned plays—The Great Leap with Seattle Repertory Theatre and American Mariachi with The Old Globe.

Garrett is a recipient of the National Endowment for the Arts and Theatre Communications Group Career Development Fellowship for Theatre Directors and a member of the Stage Directors and Choreographers Society. Garrett is also a member of the board of directors for Theatre Communications Group, a company member at Woolly Mammoth, and an advisory board member for Mixed Blood Theatre.

Garrett is a graduate of California Institute of the Arts with an MFA in directing.

Madeline Sayet is a citizen of the Mohegan Tribe and the Executive Director of the Yale Indigenous Performing Arts Program. For her work as a director, writer, and performer she has been honored as a Forbes 30 Under 30, TED Fellow, MIT Media Lab Director’s Fellow, National Directing Fellow, Native American 40 Under 40, and a recipient of The White House Champion of Change Award from President Obama. Her play Where We Belong, first shown in London at Shakespeare’s Globe, will have its US Premiere in DC as part of Woolly Mammoth Theatre Company’s coming season. Recent directing work includes: Staged at Home: a Virtual Benefit Concert (Long Wharf Theatre), Henry IV (Connecticut Repertory Theatre), Midsummer Night’s Dream (South Dakota Shakespeare), Whale Song (Perseverance Theatre), She Kills Monsters (Connecticut Repertory Theatre), As You Like It (Delaware Shakespeare), The Winter’s Tale (Amerinda/HERE Arts), Poppea (Krannert Center, Illinois), The Magic Flute (Glimmerglass), Miss Lead (59e59).  www.madelinesayet.com

Sam White Shakespeare in Detroit was founded by Sam White, an artist, activist and entrepreneur born-n-raised in the city of Detroit. She has won several awards during her tenure at the helm of the organization, including an honor from Detroit Mayor Duggan for Excellence in Theatre in 2014, Crain’s Detroit Business’ 40 Under 40 also in 2014, the Breakthrough Award from the National Association of Women Business Owners in 2015, Michigan Chronicle’s 40 Under 40 in 2015 and PEPSI’s Black History Now recognition in 2016.  She was also recognized by Complex magazine as one of the “10-Forward-Thinking Entrepreneurs in Detroit.” She continues to also be a highly sought after speaker in North America having taught an exciting meditation-based Shakespeare workshop at the University of Waterloo in 2016 during the PLAY Symposium in Stratford, ON along with two TEDx talks  – TEDx Chatham Kent(2016) and TEDx Detroit (2014). Last year, she was inducted into the Mumford Hall of Fame with the Innovator Award as a Detroit Public Schools alum and she was recognized as a Michiganian of the Year c/o The Detroit News.

White’s credits also include the prestigious 2017 Paul Nicholson Arts Management Fellowship at Oregon Shakespeare Festival. She is also a member of the 2017 Cohort for ArtEquity in Los Angeles, CA. In addition, White served as the Assistant Director for Antoni Cimolino’s  2018 production of The Tempest at the Stratford Festival (Canada). She was also a part of the inaugural 2019  cohort for Classical Directing Fellows at The Old Globe in San Diego, CA.  White served as the director of 2019’s Twelfth Night at the Utah Shakespeare Festival  in Cedar City, UT and recently completed the Director’s Intensive at Yale University during its Summer Session.

Dawn Monique Williams is the Associate Artistic Director of Aurora Theatre Company in Berkeley, CA. A native of Oakland, Dawn was previously the Artistic Associate at the Oregon Shakespeare Festival where she directed Merry Wives of Windsor in 2017. Her recent directing credits include Aurora’s Bull in a China Shop, Earthrise at the Kennedy Center for the Performing Arts, TiJean and His Brothers, Women on the Verge of a Nervous Breakdown, The Secretaries (Willamette Week’s Top 10 Portland Theatre Productions of 2018), Romeo & Juliet, August Wilson’s The Piano Lesson, and Lynn Nottage’s By the Way, Meet Stark. She’s directed a range of plays including the English language premiere of Gracia Morales’ NN12, Othello, Twelfth Night, In the Blood, Steel Magnolias, Children of Eden, The 25th Annual Spelling Bee, Little Shop of Horrors, Burial at Thebes, Medea, Antigone Project, and La Ronde; international directing credits include Edinburgh Festival Fringe productions of Scapin the Cheat, Anna Bella Eema, and The Tempest. Dawn was a 2016 Princess Grace Theatre Fellowship recipient, was awarded a TCG Leadership U residency grant, funded by the Mellon Foundation, and was a former Killian Directing Fellow at the Oregon Shakespeare Festival. She is an alum of the Drama League Directors Project and holds an MA in Dramatic Literature and an MFA in Directing. Dawn is a proud member of the Stage Directors and Choreographers Society.